For years and years,  Dad, Mum, and I would go out every Saturday on errands. These errands involved many stops, usually including the East Athens Grocery for meat (Mom: “Now, Jake, have you cleaned the pork out of your meat grinder? Jake: Oh, yes, Miss Ida. Mom: I want two pounds of this very lean round steak, run through the grinder twice. But ONLY if you have really cleaned all the pork out of the grinder. Jake: Yes, Ma’am. Mom: Because we are going to eat this ground beef raw, and I don’t want my family to get ptomaine. If they get sick, I will come back and shoot you.  Jake: Say, what?! You gonna eat this RAW?!)

Yes. The Kale Whisperer grew up eating raw beef (known in upper-crusty circles as Steak Tartare) every single Saturday night of her young life. On home-baked rye bread with sweet butter and a glass of V-8 and sauerkraut juice to wash it all down. It was magical.

Our Saturdays always finished at the McDonald’s on West Broad St. (until they built one on our side of town), which was my reward for at least pretending to be patient while Mum talked her way through one grocery store after another. Dad and I usually had two-all-beef-patties-special sauce-lettuce-cheese-pickles-onions-on a sesame seed bun. Mom always had to have a Quarter Pounder with onion only, no cheese, no ketchup. No nothin’. This wasn’t a thing at McD’s, so we had to wait, and wait. . . and wait. And about 50% of the time, her burger arrived with everything BUT onions.

On the way home, we passed Gresham’s Disco, Sports Bar, Auto Body shop and Used Car Lot. This place captured my imagination from a tender age because, for decades, it had blackened windows but for a sign that read “Troublemakers Will Be Bard.” As a lifelong sufferer of Ortographobia — the fear of spelling words incorrectly, or, more accurately, the fear of the consequences of being constitutionally incapable of spelling words correctly — I stood in awe of this brave and constant exercise in thumbing one’s nose at spelling convention. For all I know, that sign still stands. I hope it does. Next time I am in Athens, I’ll check and let you know.

Little did I know, at the tender age of 10, that the Bard would become a major force in my life. First, in my Honors English Composition class, I was required to interpret a different Shakespeare Sonnet each week. My first effort earned me a D. GASP! No one ever gave me a D. I was crushed. And determined to do better. I chained myself to the Oxford English Dictionary for the remainder of the quarter. I eaked out an A. The Professor, Charles Allen Beaument (who chewed nicotine gum elegantly), became my academic muse. He died in 2011. He was a lovely man, and an absolutely terrifying Professor.

I went on to take four more Shakespeare courses at the University of Georgia. They changed my life. Really. I would have majored in English, but I was terrified of the History of the English Language class, which was required and which, reputedly, no one ever escaped with a grade higher than a C. But my love of Shakespeare lived on. So much so that I named one of my children for the Bard. 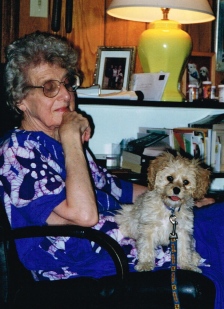 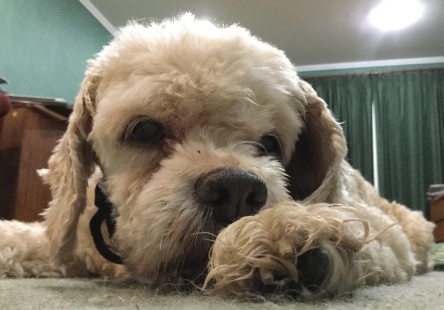 This is Shakespeare. He was a millennium puppy, born in February 2000, at about the same time that my beautiful, neurotic, and — in the immortal words of my friend Elizabeth — not very s-m-a-r-t, Miss Peanut died, too soon, of kidney disease caused by a rough start as a burlap-bag puppy.

Shakespeare is my hero. He and his big brother, Crackerjack,  and Peanut before him saved my life. Many times. They gave me a reason to get out of bed on the days when I was weighed down by the Black Dog. They welcomed me home from the Psych Ward without judgment. (Although Peanut made her Auntie Elizabeth pretty cross when she turned her back on me after a particularly long hospitalisation. But it’s OK. I understood.)

They made friends with all the neighbours. If I fell down the stairs and broke my neck (or, as in one case, my head), eventually, someone would miss Shakespeare, Crackerjack, or Cully, and come check that they were OK. Hopefully, before they had to eat my face to survive.

The subtitle of my Shakespeare’s biography will be: Troublemakers will be Bard. He was born with a twinkle in his eye. He ate the cover off my treasured copy of Marcella Hazan’s The Classic Italian Cookbook.  We had words. I told him if he kept eating cookbooks, he’d have to work on his resume. So he ate the first three chapters of a history of Iraq. And all my knickers.

His main purpose in life was barking. At the UPS courier — who always gave him cookies anyway. At other dogs that had the cheek to walk on HIS sidewalk. At the pile drivers that were widening the Beltway (that was a long year). At falling leaves. At snow.

When his big brother, Crackerjack, went a bit deaf, Shakey became his hearing-ear dog. When I got home, Shakey would greet me at the door then run back upstairs to poke Crackerjack and let him it was time to come down and greet Mom.

And when Crackerjack got too old to jump up and steal food off the kitchen counter, Shakey did it for him.

Whenever I went home to visit my parents, we would reenact the weekly pilgrimage to McD’s, although usually on Sunday. We always ordered way too many french fries so that when we got home, Dad could do this:

My dogs were french fry bandits. They could read a McDonald’s bag at fifty paces. Somehow, they managed to wrangle our neighbours, and their surrogate parents, Pete and Anita, into the whole french fry scam. Pete and Anita were too classy for Mickey D’s. They went for Five Guys. And when they went to Five Guys, my boys always got a gift from the french fry fairy. It was like a french fry tithe.

Crackerjack crossed the rainbow bridge in May 2010, just shy of his 18th birthday.

Shakey introduces his baby brother to his namesakes: Pete and Anita McCullogh

We mourned for a while before we brought home a baby brother for Shakey. Even at the relatively advanced age of 10, Shakey was an awesome big brother. He taught Cully to play in the snow, to bark, to eat bunny poop, to find the comfiest places for naps, and to beg for french fries.

In 2012, he and his brother trustingly got into two travel kennels and took a very long plane ride to the other side of the world. They were heroes. They made the transition to rotating counterclockwise before lying down (as dogs do in the Southern Hemisphere) and being called Spoodles without a hitch.

Shakey didn’t even complain . . . much. . . when we told him a piglet was coming to live in our house.

By this time we brought home yet another pesky little brother, Shakespeare was deaf and getting a bit shaky on his pins. But he was still a sport. And CJ (named for Shakespeare’s much-missed big brother, Crackerjack) has grown into his role as an attentive . . . sort of . . . younger brother.

Shakespeare is still going strong. He doesn’t bark anymore. He has said all he has to say. He’s leaving the barking to the youngsters.

He’s moving pretty slowly, but he gets where he need to be.

And he loves us.

Shakespeare is a still troublemaker. And he is my hero.

The Bard is The Man!