Every morning, between our first cup of coffee and “breakfast”, which is usually more like elevenses, Simon, the boys, and I go out for a morning romp. Simon feeds the pigs and alpacas, I give the chooks their morning eggshells, Shakey has a morning constitutional, CJ chases his tennis ball, and Cully does whatever Cully does.

This morning, though, CJ couldn’t find a tennis ball and then, suddenly, he disappeared into the bush. When we all came in, I detected a whiff of deja vu. Something like . . . what? Ah! I remember! The summer a possum crawled under our air conditioner condenser and died.

Filling chez Ziemke with the bouquet of road kill.

We spent the night in a motel.

CJ has had a bath.

Some childhood memories, I can do without.

Music can tap into memory in a powerful way and has, for me, become a transformative outlet for my tangled emotions. Taste can trigger memories. For me, tomato sandwiches (on squishy white bread with Blue Plate Mayonnaise) will always taste like summer in Georgia. But smell alone can, almost literally, transport me back in time. It is far and away my most evocative sense, for better and worse.

The smell of bread baking always — every single time — carries me back to my Mum’s kitchen.

The smell of chlorine or coconut oil takes me back to long, lazy summers hanging around at the Green Acres Pool — and probably earning myself skin cancer.

And I can smell when it is going to snow.

Then there is dead possum.

And the smell of liver and onions frying. We had liver once a week until (God bless ’em) the nutritional powers-that-be declared it unfit for human consumption because of its high cholesterol. Liver and onions smell deceptively delicious when they are cooking, especially when they are cooked — as Mom always did — with bacon. I, however, was not fooled.

Mom was a marvellous cook. Almost everything she touched turned to deliciousness.

With two exceptions: liver and onions, and her baked fish casserole, which replaced liver and onions night post-cholesteral consciousness raising. She layered thawed flounder fillets (which came in unappetising-looking fish bricks) with canned tomatoes, sliced onions and green peppers, and topped the whole thing with sliced lemons and breadcrumbs.It smelled like some ill-considered tex-mex cat food and tasted worse.

Dad claimed to like it. I think he was trying not to ruin his weekends. It was disgusting. I prayed for fish fingers. They never came. I’ve never quite recovered and still have an extremely cautious relationship with fish.

All these years later, when I get a whiff of the fish monger at the Farmers’ Market, I get a pit in my tummy that says “Oh, no. Fish casserole.”

My life in New Zealand is full of new smells that are building new emotional memories that will stay with me wherever I go.

Wee piglets. I will never forget the smell of our Wee Charlie when we first brought him home. You know how babies smell like milk? Well, Wee Charlie did, too. I know. I bottle fed him for four weeks.

Turns out bottle feeding a Kune Kune piglet is a full contact sport.

The hangi, a Maori banquet cooked in the ground — sometimes with wood, sometimes in geothermal steam vents. I’m not Maori, but the smell reminds me of family. 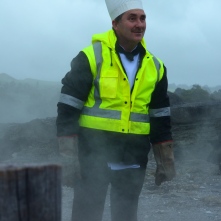 Rotorua, which smells like boiling mud because it is full of , well, boiling mud. And spas. What’s not to love? 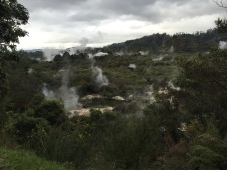 Penguins, which, come to think of it, smell pretty much like Mom’s fish casserole. 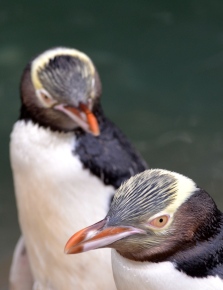 Muddy chickens. We don’t have any sand, but there is a sunny, peaty spot where the Saltenberger girls like to take their dirt baths. It makes them smell like the earth. 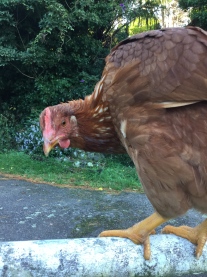 Alpaca spit. Ok, not all smells are good. But if you smell alpaca spit once, you’ll never forget it. Shearing day is also our annual alpaca spitting contest. Domino is the undisputed champion.

Domino, getting ready to let one go 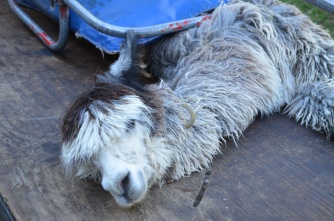 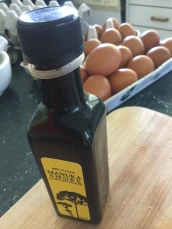 And the waiting room of the Hutt Valley DHB Mental Health Services, where I went every week for six months and where my lovely therapist introduced me to me. When I started, that room smelled like any medical waiting room, a combination of fear and anxiety. As Jane helped me, gradually, to let go of what I didn’t need — guilt, grief, insecurity, and failure — and embrace what I had left behind — my happy childhood, my inner musician and artist, the future, and kale — that scent of fear transformed into one of healing and growth. 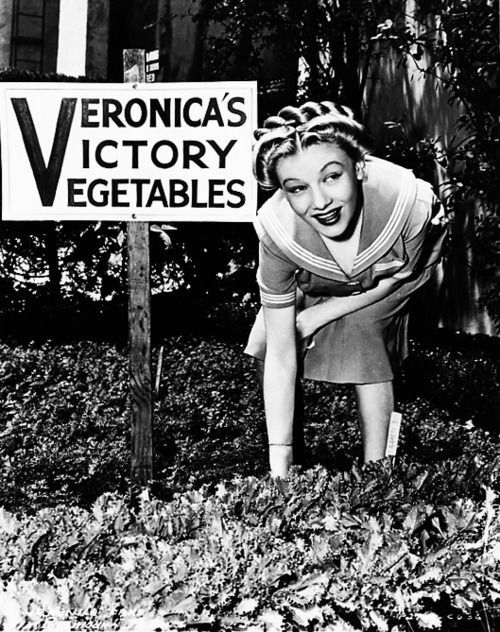 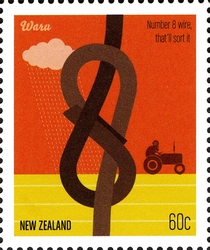 Kiwis take great pride in what they call their “number 8 wire” mentality. In a small, remote country peppered with small, remote communities, specialised materials can be hard to find. So, Kiwis have learned to make do. A Kiwi bloke, it is said, can fix anything with a piece of number 8 fencing wire. Kiwis are proud of their ability to improvise, adapt, and overcome.

When an earthquake knocked down Christchurch, they built a shopping mall out of shipping containers and a cathedral out of cardboard.

My Dad had a bit of the number 8 wire mentality. The wife wants a $1000.00 Tiffany lampshade for Christmas? Make one out of chicken wire and coloured glass.

Dragged your feet until all the Christmas trees are gone (Southerners put their trees up the day after Thanksgiving)? Build one out of dowels and holly branches from the garden. The wife flushed a toothbrush down the toilet and got it stuck in the U-bend? Take the toilet out onto the driveway and melt the toothbrush with your blow torch.

Okay. That last one didn’t work out so well. Turns out ceramic toilets can catch fire. Which it did, burning for several minutes (long enough for neighbours to come gawp from far and wide) before breaking in half. Try living that down. I hear someone related that story, to gales of laughter, at Dad’s Memorial Service. Oh. Wait. That was me.

I’ve learned some things about improvising since moving to New Zealand. Cake flour not a thing? Take three tablespoons out of each cup of standard flour and replace with potato starch, then sift the hell out of it. No graham crackers? Use digestive biscuits. Chickens escaping into the primary school next door? Plastic snow fence. Broken accordion? Get a digital piano until you can find an accordion fixer — or a new accordion.

I haven’t found a way to use number 8 wire to fix an accordion.

The career you built over 25 years goes up in flames, along with your mental health and sense of self worth? Take your crazy pills and build a new self. One that you love. One that honours who you are, not who you think you should want to be.

I came to New Zealand to be a Professor of Defence and Security Studies and a Southern Hemisphere consultant on countering violent extremism and cross-cultural communication. Three years later, I’m a fairly anonymous food blogger and brassica evangelist. I’m also an aspiring accordion virtuoso with a broken accordion accidentally finding my bliss, and myself, on a digital piano.

Some would call that a failure. I call it a rebirth.

Food and music, it turns out, are a pretty good “number 8 wire” for a broken soul.

When I was in High School, I took up the saxophone so I could play in the Stage Band (part big-band, part Dixieland, part jazz, part dance band). 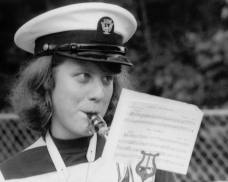 We played everything from World War II-era swing and Dixieland to Dave Brubeck and Frank Zappa, but I longed to learn to improvise. To take break free of the chart, fly, and make jazz magic all my own.

But I was too shy and, I thought, too female and too caucasian. I didn’t know the rules, and there must be rules. I reckoned I was too lazy and enamoured of my creature comforts to make it as a musician. In the 1970s, when I was teenager, becoming a professional chef certainly wasn’t a thing. Girls who could cook taught Home Economics. And I had this brain . . . and I could write . . . and I grew up around scholars . . . and history was in my blood.

So I followed the recipe. Played the notes that were written. Coloured inside the lines. Did what was expected of me.

I went to college. I got As. I earned a free ride to Graduate School. I got married. I got divorced. I got a Ph.D. I got a job at a Defense think tank. And I struggled to find ways to transform my longing to create into national security analysis. Sometimes, I almost succeeded. I hated about 50% of the work I did, felt “meh” about 40%, and loved about 10%. And, I reckoned, that was probably better than most people do. I made good money. I had amazing colleagues and friends all over the world. I did some valuable work. I traveled the world. Sometimes, as with my countering violent extremism work, I did work that made me proud and gave me joy. I don’t know if I made the world a better place, but the world made me a better person. 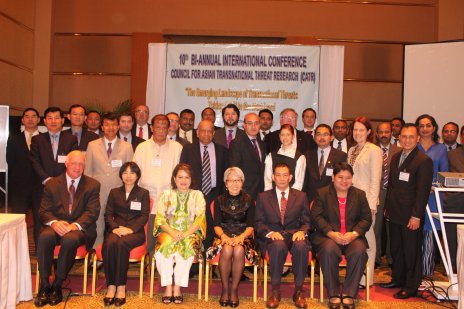 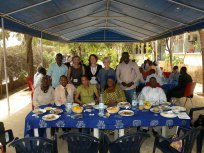 Then my parents got old. And they developed dementia. They weren’t eating. The house was a tip. But they didn’t want to leave.  Again, I tried to follow the recipe, play the notes that were written, colour inside the lines. To be a good daughter. To make their lives better. To make them happy.

But this time, I failed. I hadn’t saved them from the indignity of getting old. Not because I wasn’t good enough, or didn’t try hard enough, or failed to follow the rules. I failed because failure was inevitable. I know this now. My parents were never going to be as they were. Our little family was gone for good.

So, I thought, was my anchor. I spent my life following the script of the good daughter handbook; working to make my parents proud. Not because they expected it, but because I did. But now I wasn’t a daughter. From now on, whether I liked it or not, my life was an improv.

I was terrified. I was setting out on a seven-year panic attack.

Luckily, I found a new anchor. On a train. In Australia. And reader, I married him.

And I ran away with him. To New Zealand.

Simon held me up when I broke. He pulled me away from the edge. He kept me safe. I know he was terrified, too. But he didn’t show it. Not to me.

He has supported all my various schemes to heal — through therapy, wall paper shredding, cooking, knitting, colouring books, a tattoo and an accordion. 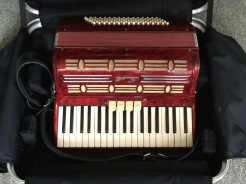 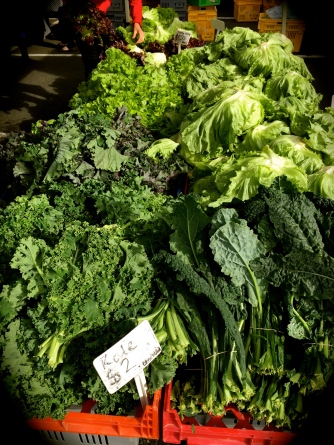 He saved my life.

But now, I know, it’s up to me to keep going. And growing. And I’m doing it without a plan or a rule book. I’m well off the map.

I’m tracking my adventure through this blog. And I’m playing my own, improvised sound track. Thanks to my remarkable music teacher, Katie, I’m learning that when it comes to music, and life, I don’t have to learn to walk before I can run.

This white girl can jam!