More years ago than I care to mention, I was named for my two grandmothers: Frieda Matthaie Ziemke and Caroline Ketz Saltenberger. Frieda died too young and many many years before I was born. I never knew her. I have a few photos of her. She was very beautiful, and very young. Sadly, I will never be able to share any of her recipes. We have none. No written memories of her at all. At least none that I have seen. All I have of her are a few photos and her name, which I cherish. She always looks a little sad. 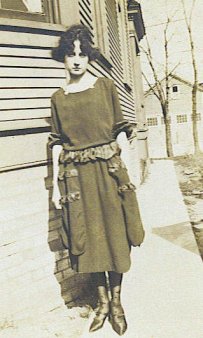 Caroline lived into her 80s, but she was damaged by a series of strokes, also too young, a few years before I was born. I knew her, but the Carrie Saltenberger I knew was frail, largely confined to her armchair (and later a wheelchair). She was felled by the hypertension that runs in my family and that was, sadly, untreated in her case. She was feisty, though, and had a wicked sense of humour. Woe be on any little kid that thought they could pull something over on Grandma because she couldn’t move very fast. She was a demon with her fly swatter.

For the first fifty years of her life, Grandma Saltenberger was a hard working farm girl.

Along with my Grandfather and his maiden sister, Ida — known to us as Tanta — Grandma worked their little farm in far Northern Wisconsin, raising dairy cows, chickens, occasional turkeys (which she hated), growing vegetables, and sustaining the family through the Depression and the War years on very little in the way of cash.

As the years went by, Grandma became less and less rooted in the present, but her command of the past was astonishing. I remember her teaching me to make biscuits by reciting the recipe, step by step, as I measured, sifted, blended, cut and baked. Much of what I know about the Saltenberger family’s (occasionally colourful) history came from Grandma. Usually on the sly, while my Grandpa was napping. Like many other families, the Saltenbergers have two histories, the official one and the “interesting” one. Grandpa was the keeper of the official history. You went to Grandma for the interesting bits.

Portrait of Carrie Saltenberger in 1975

Strictly speaking, this is not a pie at all, but a cobbler or, perhaps, a crumble. I found the recipe tucked among the correspondence between my Mum and her aunt, our Tanta. Tanta would have written the recipe after Grandma’s illness made it difficult for her to write. But Tanta made the provenance of the recipe clear, this was Carrie Saltenberger’s recipe, her favourite recipe. “Many years old.” Part of my family’s past. 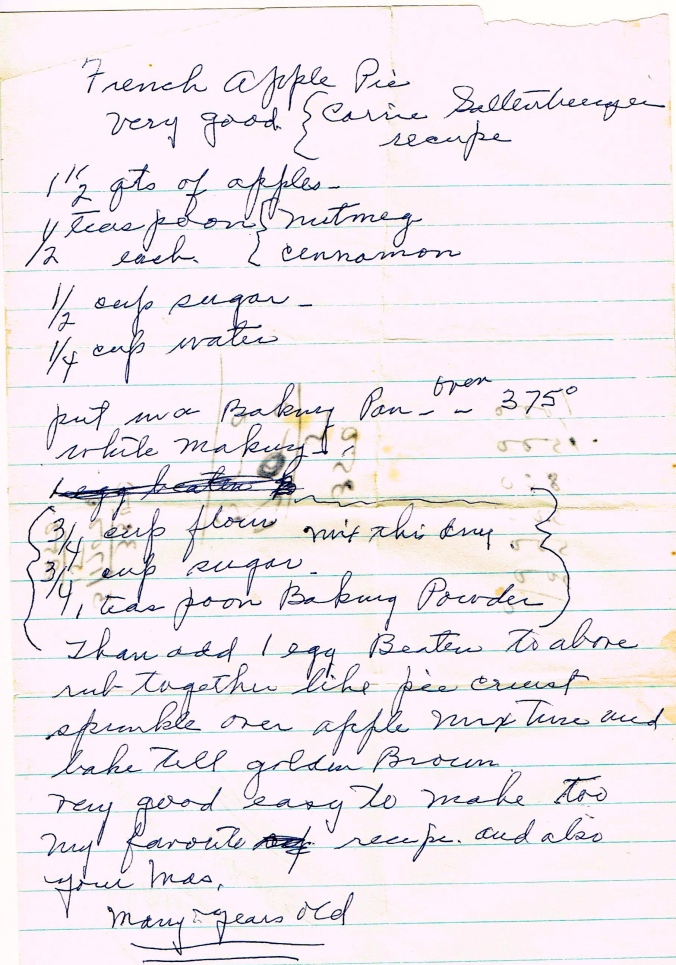 As is often the case with Tanta’s recipes, the directions are a bit notional. I’m not sure what makes it French. Perhaps they called it “French” to distinguish it from Dutch Apple Pie, with custard, and German Apfel torte. “Put in a baking pan.” What kind? Glass? Metal? What size? Does the baking pan go in the oven while I’m making the crust? How long? These were all questions I set about to answer, through trial and error.

I did make a few changes to “modernise” the recipe a little, but nothing that changed the fundamental simplicity and homeyness of Carrie’s original. I’m not a huge fan of nutmeg, at least not in large quantities. So, I stepped up the cinnamon, cut the nutmeg, and added another dimension with allspice and black pepper. I love black pepper with fruit. It makes it taste fruitier, somehow. It is a must on flabby tasting supermarket strawberries. The Italians use black pepper on fruit a lot, so perhaps I transformed Grandma’s French Pie to an Italian one.

Grandma would have used apples from their apple tree (which was still going when I visited as a child). The apples would have been harder and more tart and probably would not have produced as much liquid as my New Zealand-grown Farmers’ Market apples would. So, I also added cornflour to the fruit as a thickener (which is entirely optional), and dotted the fruit with 2 TBS / 1 oz / 25g of well chilled unsalted butter, cut in smallish chunks, also to thicken it a bit. I also cut back on the sugar and added a bit of salt to the crust.

As it turns out, the experiment was a thundering success. The result was everything I’d hoped: homey, delicious, and as Tanta wrote, “very good easy to make, too.” Not too sweet, either. The crust tastes pleasantly eggy, something between a cake and a meringue. When warm, the spicy apples cry out for a scoop of vanilla ice cream, but all I had was cream, which was also pretty darn yum.  No wonder Tanta encouraged Mum to try it, adding it was “my favourite recipe and also your Ma’s.” Ladies, you had good taste!

Peel, core, and slice the apples.

Stir together the sugar, cinnamon, allspice, black pepper, and cornstarch in a small bowl, then combine it with the sliced apples.

Arrange the apple slices in the baking dish, sprinkle the water and lemon juice over them, and put them in the preheated oven for 20 minutes. 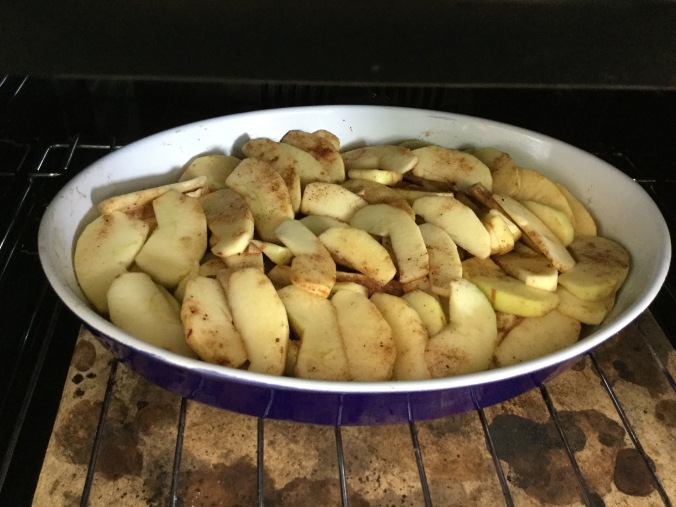 See, Auntie J: I tried to arrange the slices in sort of rows! But my soul resists order.

While the apples are baking, sift together the flour, sugar, baking power, and salt. Lightly beat the egg in a separate bowl.

Combine the beaten eggs with the dry ingredients and crumble together like pie crust, just like Tanta says. It will feel softer and crumblier than a short crust dough, but not as dry as a crumble topping.

Take the apples out of the oven, dot with the butter, and spread the dough over the apples. 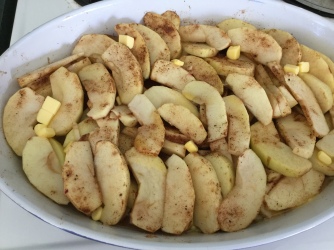 Return to apples to the oven and bake for another 45 minutes, or until the crust is golden brown.

Serve warm or room temperature with cream, custard, ice cream — whatever you fancy!