At the end of my Christmas cookbook-reviewing marathon, I’m going to cheat a little. I have changed my mind several times concerning which of Molly Katzen’s cookbooks most deserved to sit at the top of my Twelve Cookbooks of Christmas. I have some good reasons to recommend The Enchanted Broccoli Forest, which I’ll get into momentarily. But I’m really recommending Katzen’s complete oeuvre. She has written several cookbooks, including three wonderful cookbooks for kids — Pretend Soup (1994), Honest Pretzels (1999), and Salad People (2005) –and there isn’t a clunker in the bunch, although I use some more than others. With the exception of her most recent, Vegetables at the Heart of the Plate, all her cookbooks are brightened up by her own whimsical illustrations. I particularly love the first two, The Moosewood Cookbook and Broccoli Forest, which are hand-lettered, too. It’s like cooking from a recipe copied out by a friend or handed down your Mom or Grandma.

Along with The Tao of Cooking (See the Second Cookbook of Christmas), Moosewood and Broccoli Forest are my oldest cookbook friends. I’d like to say I learned to bake bread from my Mom, or from Bernard Clayton (who did teach classes in Bloomington, India when I lived there), but the truth is, Molly taught me to bake bread. Her illustrated tutorial on bread making  is magnificent. It is important to note that her instructions are for making bread by hand, which you really should do at least once. But the recipes are easily enough adjusted to make the dough in a standing mixer or, if you must, a food processor. Because most of her breads are partially or completely whole grain and many include heavy ingredients (like nuts, fruit, or vegetables, she uses the sponge method. This allows the yeast and flour to develop some gluten before all the ingredients are added. The bread chapter in Broccoli Forest alone is worth the price of admission.

Broccoli Forest includes similarly useful tutorials for making quiche, working with filo pastry, homemade pasta, soufflés, omelettes, and knife skills for vegetables (The Various Cuts of Vegetables). Her chapter on Light Meals for Nibblers includes two of my favourite recipes of all time: Pesto Bean Dip, and Mushroom-Cheese Pate. Broccoli Forest is still, after all these years, one of my most-used cookbooks. Especially when I’m feeling nostalgic for slightly hippy-dippy fare, like Tofu Nut Balls.

When people ask me to recommend a starter vegetarian cookbook, I usually recommend Broccoli Forest and /or Moosewood. The latter is particularly notable for its soups and salads, including four variations on that Fawlty Towers classic, Waldorf Salad.

The Moosewood Cookbook, first published in 1977, has a definite hippy-dippy vibe. I have both the original (1977) edition and the 1992 revised 15th anniversary edition. The revised edition goes easier on things like cheese and eggs, but it also lost some of the sense of humour of the original. So Stuffed Eggplant Hippie-Style becomes Stuffed Eggplant 1970s Alternative Lifestyle-Style. Doesn’t have the same ring, somehow. The recipe is just as good. Sadly, my beloved won’t stay in the same room with an eggplant. So I just stand in the market and stare longingly at what has become, for me, the forbidden fruit. 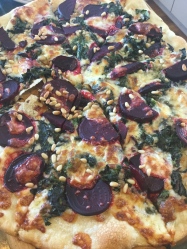 Molly’s  The Vegetable Dishes I Can’t Live Without (2007) is a cookbook I can’t live without. She returns to the hand-illustrated, hand-lettered vibe (although I suspect the lettering in one of those fonts made to look hand written). I almost got confirmed Brussels Sprout hater, Pete, to confess that he liked the Crispy-Edged Roasted Brussels Sprouts. I put the Complete Beets on Pizza, with mozzarella and a few pine nuts. Her Best Ever Green Beans Amandine with Leek Chips are the 21st century answer to “that” green bean casserole. I’m hoping against hope that my wee spaghetti squash seedlings grow big and strong so I can try the Spaghetti Squash with Carmelized Onions and Crispy Sage Leaves.

Our family always opened our presents on Christmas Eve. The official story was that we celebrated Christmas the German way, but I also suspect it was a step to enable the parents to sleep in on Christmas morning. When I was very little, Santa came to our house first, and put up the Christmas tree while Mom and I were at church. It was magical. One year, Santa snagged his britches on the fireplace andirons. Very Exciting. As I got older, Santa stopped coming and we put up the tree earlier. But we stuck to the Christmas Eve tradition. Mom and I went to the 5:30 family service at St. Gregory the Great Episcopal Church and watched the Christmas pageant, which for many years starred a donkey on wheels built by the loving hands of my Dad. Then we came home to a simple Christmas Eve supper before we dove into the loot. For the last few years, I did the cooking and always made the same Christmas Eve meal: Pasta alls Vodka and Sautéed Spinach with Garlic and Lemon. It is already Christmas Eve here in New Zealand, so I hope you’ll excuse me while I break out the vodka.